A few weeks ago I was thinking about imbalances and asymmetries in chess, how they are created and how one can use them to their advantage. For example, trading a Bishop for a Knight, or the e-Pawn for the d-Pawn.

A natural study can arise from such thinking. Let define the Piece Lifetime first.

Piece Lifetime is the number of full-moves the piece was in the game. A piece is in the game until it gets captured or the game ends.

an immediate question is “What’s the average Piece Lifetime for each of the 32 pieces?”.

We use this average as an estimator of the Expected Piece Lifetime, and this is where the name of this study comes from.

I decided to write a code that takes a game in PGN format and computes Piece Lifetime for each of the 32 pieces. Each piece is uniquely identified by its starting square which helps distinguish pawns, knights, bishops, and rooks of the same color. I track the position of each piece during the game, and the piece’s lifetime is determined as the number of full-moves when the piece is captured, or the game ended. There is one edge-case we need to handle - the pawn promotion. I decided to pick a simple rule: when a pawn promotes to a piece, no new piece is “born” after a pawn is promoted, instead, the pawn remains alive.

Then, in order to have some meaningful results, we need to run this code on many games and compute the mean of pieces lifetimes.

I used the Lichess Elite Database created by @nikonoel, specifically games played on October 2020 from this database - there are just over 403K such games there. It is an awesome resource as it is essentially the filtered Lichess games database to only keep games by players rated 2400+ against players rated 2200+, excluding bullet games. All the credit for the data goes to @nikonoel and the Lichess Team.

The complete source code for the study in the notebook form is available here: https://github.com/chessvision-ai/chess-piece-lifetime-expectancy

The plot is generated by the provided source code. 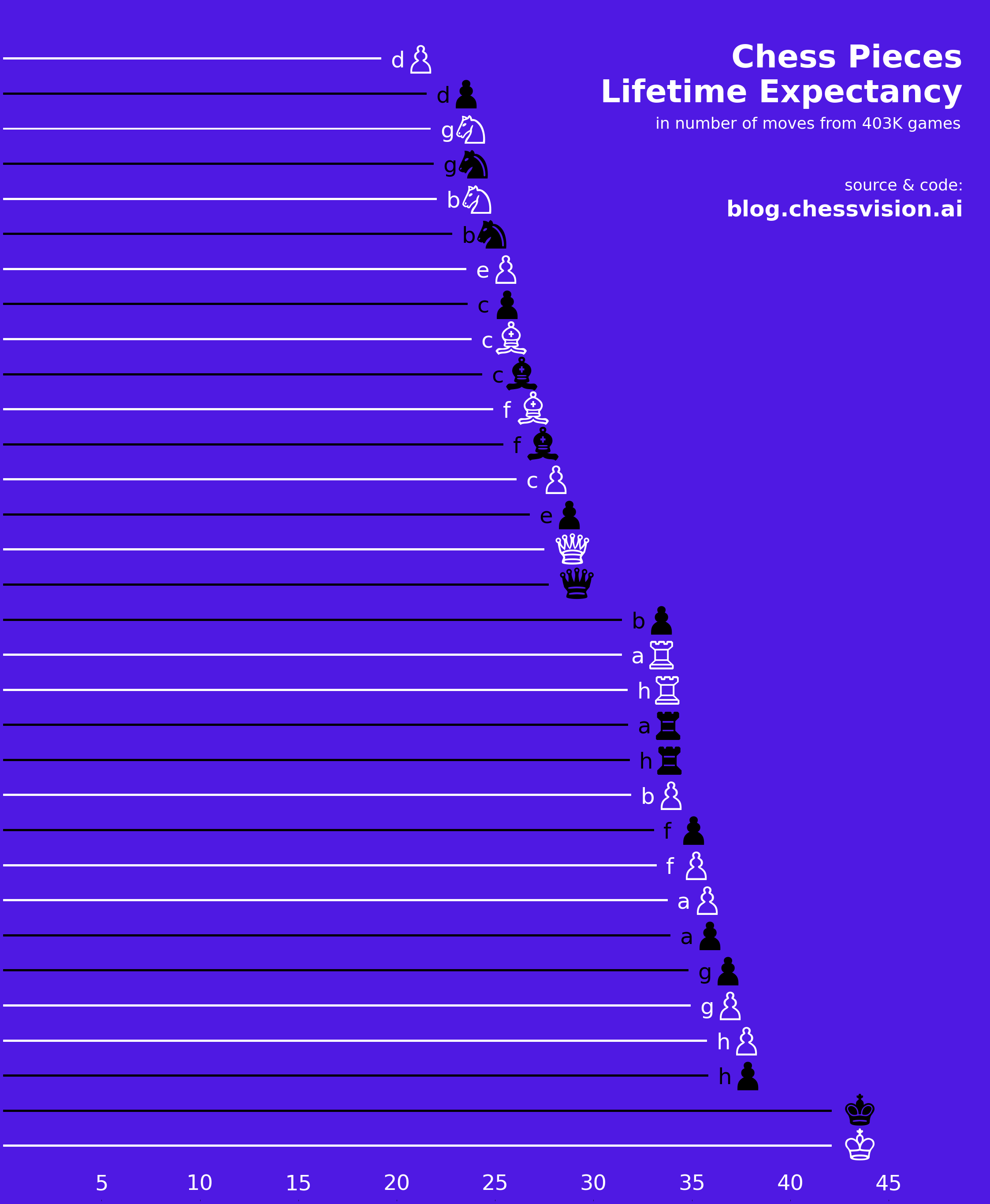 Often when watching chess video lectures, I hear the advice of not capturing the opponent’s piece in favor of putting more pressure, for example, to get a mo...

chessvision-ai-bot predicts whose turn is it from highlighted squares

So far the bot has been predicting whose turn it is only from the post title. It was simply looking for phrases like “white to play”, “for white”, etc. Now i...